Tanya Philips has battled Autism and Asperger’s all her life, along with being partially sighted and partially deaf, Tanya has been a single mother to two children, one having cerebral palsy, a heart defect and autism.

Tanya having left school with no qualifications now has three degrees a BA (Hons) in Education, a BSc & MSc in Psychology and is now working towards her 3rd Ph.D. on health and social care. Her main focus is identifying prisoners with ASD and designing a framework to rehabilitate those identified to not re-offend.

Tanya was a recent winner of an ERSA Award and a presenter to the Ministry of Justice. Tanya definitely flies the flag for ASD and Asperger’s. 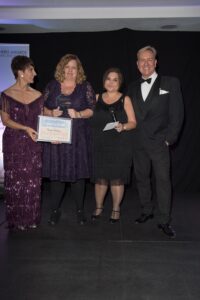 Seray Marius has two brothers age 35 and 12 both diagnosed with Autism. Seray was a constant support to her older brother, looking out for him and helping her mum when she became a single mum. She never complained and never treated her brother any different which is why he is so independent today.

When Seray was 21, her mum found out she was pregnant and her youngest brother was not only diagnosed with Autism but had Cerebral Palsy too.

Seray will watch the same film with her brothers over and over again and listen to their constant singing, she will re-arrange work to attend their appointments with her mum and never complains when missing out on important mother daughter time if it has to be cancelled.

Seray’s mum thinks she is one in a million. 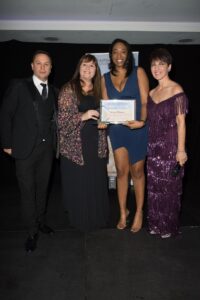 Noah Loo is only 12 years old, he was diagnosed with Autism age 8.

Noah sees himself as a sensitive and creative person although he suffers with great anxiety. Noah started to draw age 5 when his mum was going through cancer treatment, he drew big characters holding weapons expressing his feelings of protecting his mum.

In 2017 Noah was invited to design the poster for Festival of Autism Swansea, this is an event to celebrate the achievements of those touched by Autism.

He has since held his own art exhibition at various venues. He was commissioned to design the birthday cards for the Award Winning Authentic Chinese Cuisine – Gigi Gao’s Favourite Authentic Chinese restaurant. Noah also won the Young Artist Award by Glynn Vivian Art Gallery 2018. 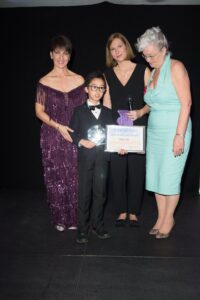 Charlotte Banfield is one of life’s diamonds according to her step father, she was diagnosed with Autism, Cerebral Palsy and has had a heart defect since birth.

Charlotte strives endlessly to be a role model to everyone around her.

Charlotte has bought home World Championship Surfing medals from competing all over the world and more recently a medal from the Abu Dhabi World Games for the GB Basketball team.

Charlotte is about to complete a BSc in Microbiology at the University of Exeter and is only 21 years old. Charlotte is an inspiration.

Richie Smith has been nominated for his passion and drive to support individuals on the Autism Spectrum. Richie a year ago had no funding and no support yet he strives to make a difference in a lot of children and adults lives.

He travels around schools in the North East teaching kids with autism that it’s okay to be them! To date he’s helped over 2000 kids and been to over 97 schools. The kids look up to him and can see that autism isn’t life limiting and they can achieve whatever they put their minds to.

He’s such a fantastic role model and inspires people. He had a dream of owning a yellow Maserati car so that others can see how cool it is to have autism, and he has achieved this dream.

Kenny Elvin lives with his two sons both diagnosed with Autism and his wife who also has disabilities. Kenny works full time leaving the house very early in the morning to complete his job before heading home to help look after his family. He drives his son Macauley all over the country so he can fulfil his dreams of performing or being a charity ambassador.

His son Owen can have meltdowns where the only thing that calms him down is walking around the supermarket holding a basket and this can be at any time of day or night. Kenny gives up his one day a week to drive Macauley from Ipswich to London to attend Pineapple Performing Arts.

When his wife is bed bound Kenny takes over the running of the house and sometimes cooking four different meals for the boys and Michelle. Kenny truly is their Hero and they couldn’t live without him. 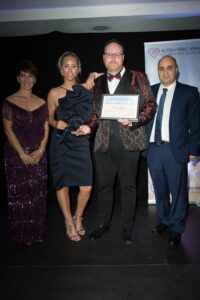 Joel Mellor has been nominated by a parent of a young 18-year-old girl who has been home tutored for the last four years due to her anxiety and depression associated with her Autism.

Despite being Head of department and having a young family Joel has never let her down and has been an unstinting source of support and positivity. He understands her needs and has given her the confidence in her ability to succeed.

This young lady has just taken up a place at University studying Criminology and without the support of Joel, she wouldn’t be doing so.Joel really is an Autism Hero in their eyes. 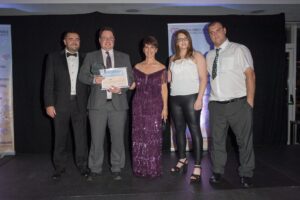 Portland College has a strong and proven history of supporting people with a wide range of disabilities to realise their full potential. 2012 was the first year where the majority of their learners had autism so they needed to make changes to provide a secure platform where everyone had the opportunity to excel. Portland introduced key roles and appointed qualified and experienced trainers to educate staff to understand Autism and to support the learners in different ways.

In 2019 they applied for Advanced Accreditation, the highest accolade possible, following a process of auditing, assessing and reporting on their quality of provision they achieved it in June 2019. They are 1 of 3 providers in the East Midlands to be awarded and are extremely proud. 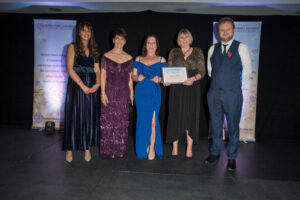 Rebecca Taylor over the last 4 years has been working on her own to design and develop a set of cards to help people of all ages understand what it’s like to travel on an aeroplane.

Rebecca has a son with Autism and is an ex British Airways Cabin Crew so she knows first-hand how demanding a flight can be.The set is made up of 7 journey cards that start from arriving at the airport to reaching the destination. The cards are multi-functional and can be used for first time fliers and nervous passengers also. Rebecca now has a digital expert working with her and she is looking open this up to the whole travel industry and other areas such as shopping centres, dental centres and cruise ships. 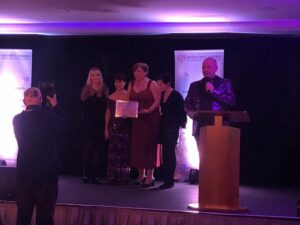 Laura Price is a mum to a young man with Autism. Many parents focus on their own families at stressful, busy times in their lives, not Laura. She set up a social media group on Facebook for Parents of children and young adults with Autism called Spectrum Club in Northamptonshire.

There are over 1700 members now who give each other peer support, share opportunities that are available in the local area and even negotiate autism friendly adjustment sessions for the cinema, swimming and other reduced rate activities.

Laura attends events and keeps members up to date, provides support and is an essential member of the local autism community. Laura is an inspiration. 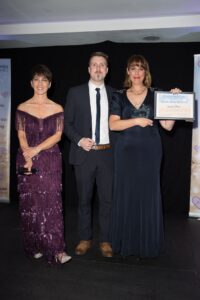 Stephen Andrade, 23, had been detained 70 miles from Holloway in an assessment and treatment unit (ATU) in Clacton-on-Sea, where he was dosed up on eight different anti-psychotic medications. Leo, Stephen’s mum had been fighting for 6 years for his release, she has been on the radio, appeared on TV and in magazines. Leo has advocated for families all over the country.

Throughout this year Leo has been working with Matt Hancock and his team to make government care plans better and for a better future for all social care. During the Summer Leo organised a protest which was held at different parts of the country, this was to put a stop to children and adults with Autism being stripped of their human rights. Leo has been fighting and highlighting the secrets kept in the UK that happens in Health and Social Care and as long as she has breath in her body she will carry on fighting to speak out and get the truth heard.

Three weeks before Christmas last year Leo’s son Stephen was finally released after Islington Council and NHS England finished adapting a house for him in Hillingdon, where he now receives 24-hour care.Stephen is doing really well his mum can now go and see him every day as he is a lot closer to her now. His carers are really looking after him and is he now getting the life he deserves. 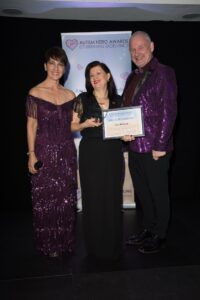 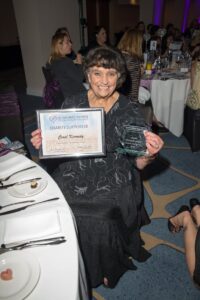 The following three finalists were not able to attend the awards.

Jane Lord started her charity Buddy’s for Children with Autism due to having no support for her and her children diagnosed with Autism.
The youth groups all adore her as she gives up her time to take them out on trips and organises Lego Therapy, she is a key part of the Autism Community in Manchester and has also spoke in Parliament.

Jane owns a charity shop of which all the volunteers are autistic or have children attend the groups. Jane always puts everyone before herself, driving children to school when the taxi fails to pick them up to babysitting so parents can have respite.

Recently Jane has bought a static caravan where families can go away and enjoy a respite holiday which is kitted out with Autism friendly things and is a fraction of the cost of other holidays.

Young Person of the Year Award:

Jayden Worthington has been nominated because he is an amazing young man, he works so hard in everything he does and always puts others first.

Jayden has had his own troubles but never puts them on other people yet he is always first to help others.

Jayden has been working with his local CAMHS and giving talks on the work they do, he has also made a documentary for them. Jayden has transitioned to Sixth Form this year and has coped really well.

Jayden had some devastating news this year when his partner sadly took his own life, even though it is a long road ahead Jayden has been coping well and is taking each day one at a time. Jayden really is an amazing young man.

Young Person of the Year Award:

Morgan Smith has shown such bravery throughout his school years. It got to a point where Morgan wanted to take his own life due to the extreme bullying which was going on and the school refused to accept it was happening.

His mum had lost count of the amount of times she had to pick him up from the side of the road having tearful panic attacks because of the nasty bullies.

Eventually they left the village they were living in and after a long battle with the LA he got accepted to a new school.

Morgan still suffers with deep rooted anxiety but has not given up his dream to go to University. Morgan helps take care of his mum who is battling a long term illness and is always there for her. Morgan is his mum’s Hero.