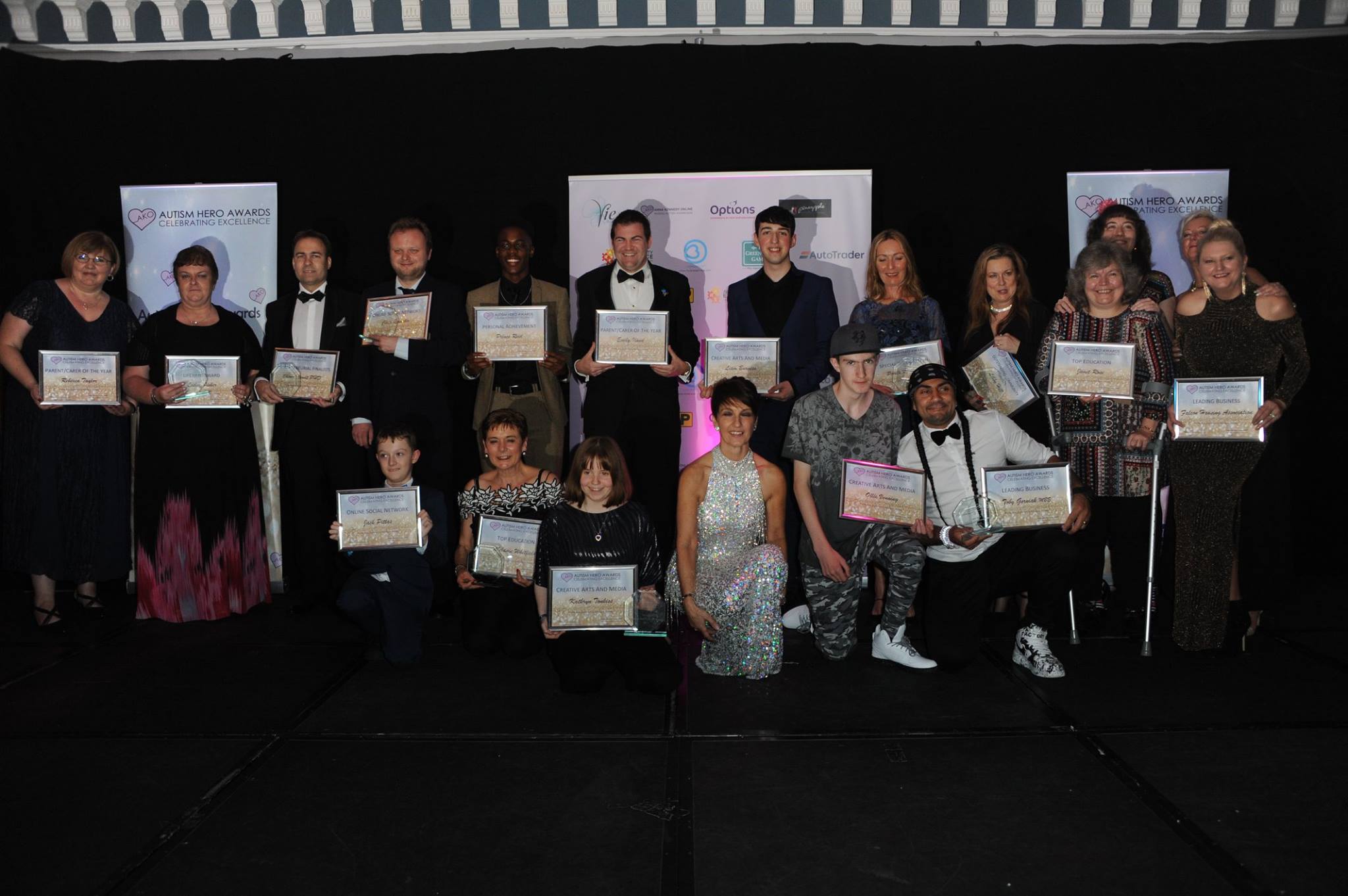 Melanie was nominated by Laura Appleby for this award for being an outstanding practitioner in positively supporting children with autism spectrum conditions and their families . She has worked with children and young people with autism for over 20 years and has always been dedicated, creative and supportive to them and the parents . Melanie has been instrumental in setting up and leading two autism specific education settings, the ARC provision within Leaways School and Brookways School . Both schools have been praised by students and parents for their ability to support and educate young people . Her team at Brookways school are very proud to work with her 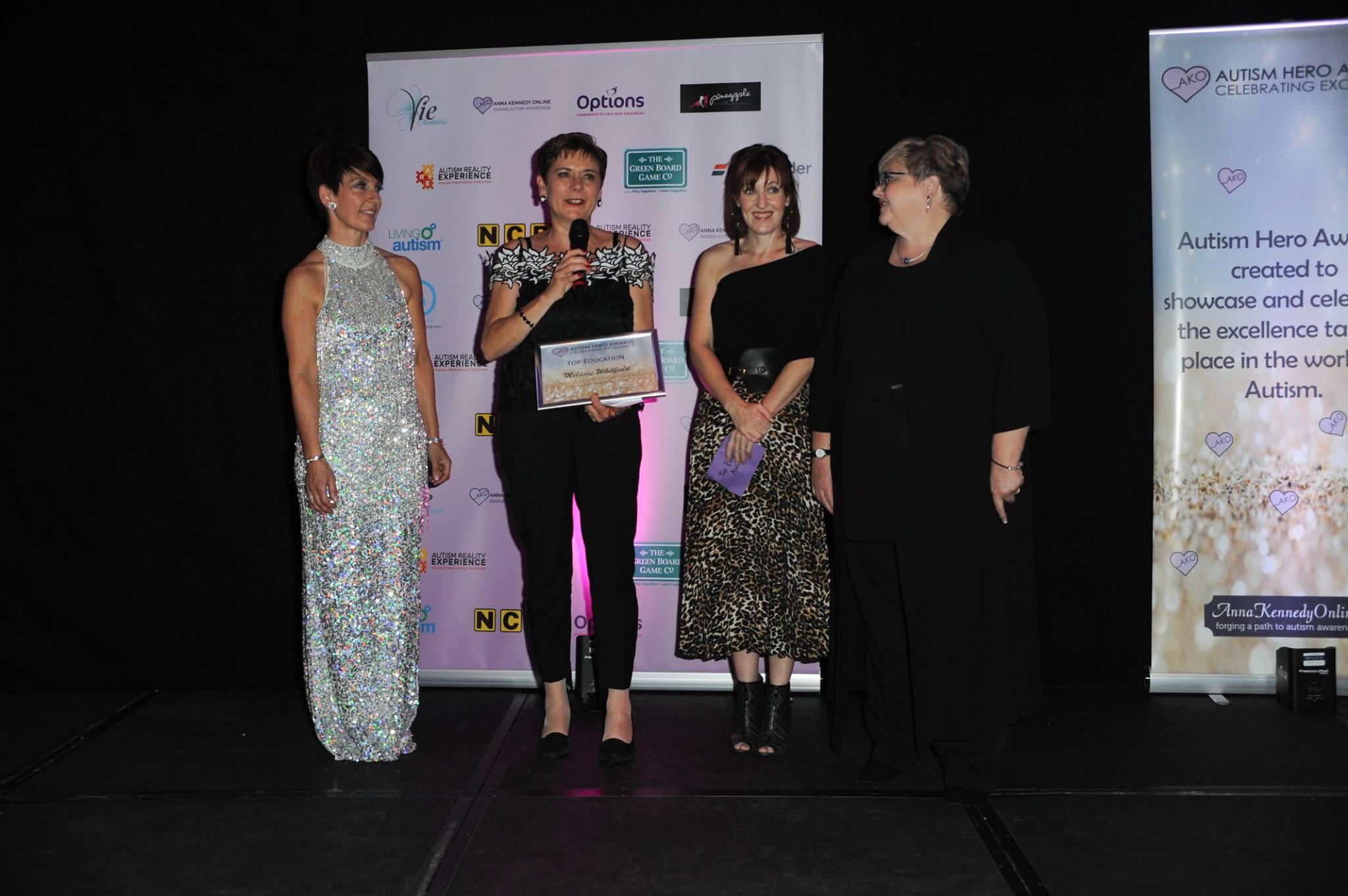 Kathryn was nominated for this award by her mum Deborah . Kathryn was diagnosed with autism when she was 3 years old . Wit h support she attended mainstream school but s he didn’t socialise easily and preferred animated films and drawing instead .

At the age 6 her knowledge of Disney and Pixar films was encyclopaedic . Kathryn was bullied at school but that didn’t define her . It was her love of animation that kept her going, she is the projectionist at a voluntary run community cinema . After working extremely hard and passing her GCSE’S, Kathryn went to college and is now looking forward to studying for a degree at South Essex College . 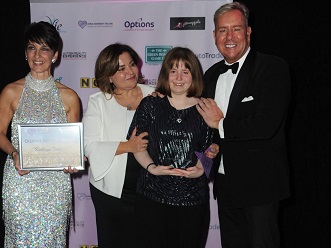 Sibling of the year

Sarah has been nominated by her mum Monira for this award . Even before Sarah’s brother was diagnosed she was a massive support to him . Last year Sarah’s mum had to go into hospital and have an operation which resulted in her being bed bound for a month . During this time Sarah helped her brother with everything from get ting him up, helping him to shower, making sure he was dressed for the day ahead, getting him ready for school, cooking, taking him to swimming lessons all whilst revising for her own exams . Sarah has written a book called ‘Autism from a Siblings and Parents Perspective’ which will be released later this year . All the monies from the book will be donated to Autism charities . 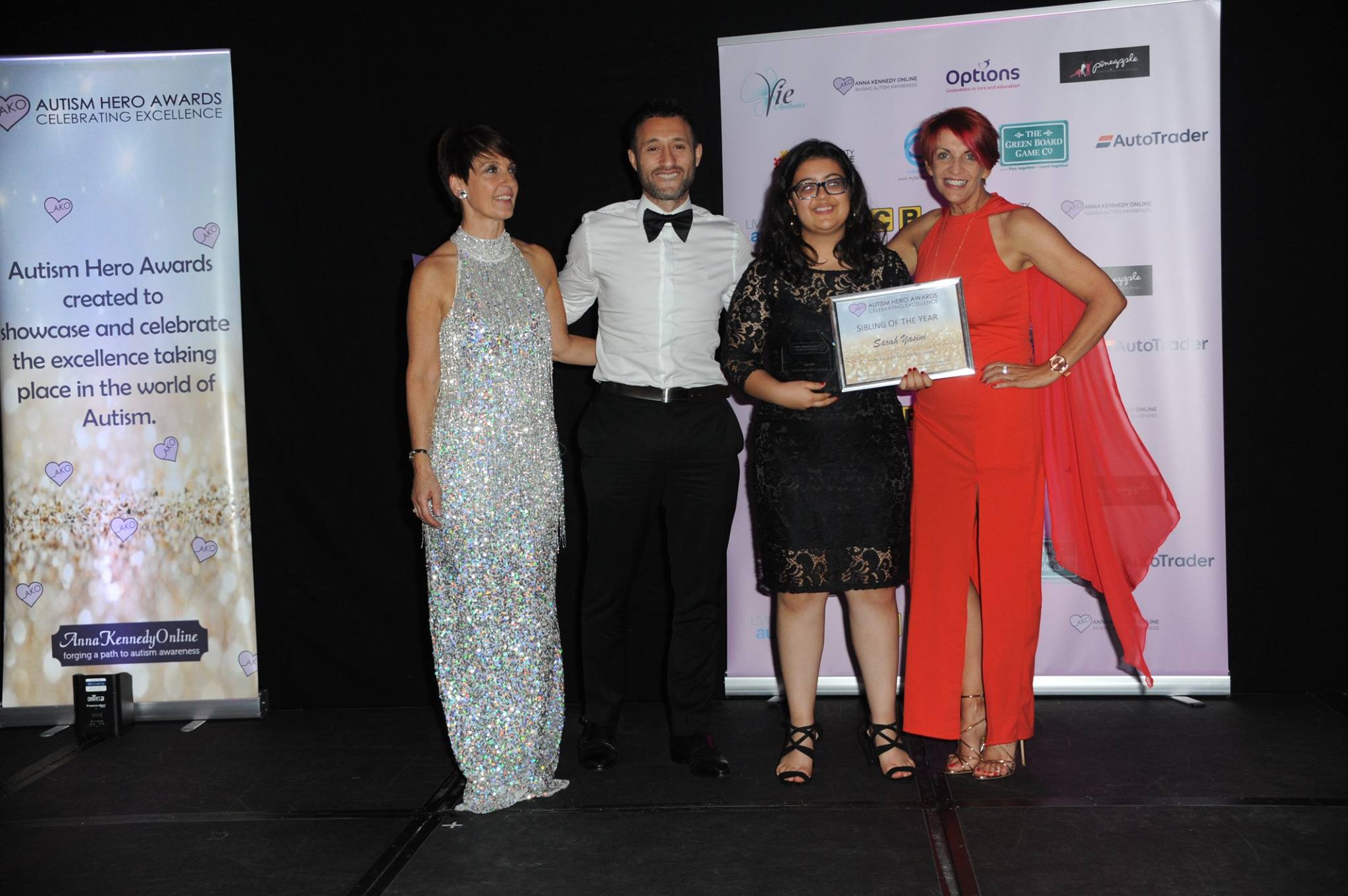 Steven has been nominated for this award by Dawn Assefa . Steven works for the online Croydon News ‘Inside Croydon’ . He works tirelessly to raise awareness and support those with disabilities and their carers . Anonymous families have submitted articles which Steven has been more than willing to share even with the nature of the articles showing that the Local Authorities have been breaking the Law .

Families are struggling to get the Local Authority to comply with the Law regarding SEN, Steven never turns down an article he’s given and always signposts families in the right direction . He is a great supporter of disabled residents and carers . One of his recent articles went viral and appeared on BBC Online . The world needs more Steven Downes’ . 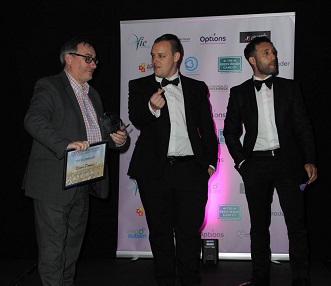 Lesley has been nominated for this award by Emma Groom . Lesley has dedicated her life tenaciously to improving the lives of others . She originally trained as a nurse and soon specialised in working with individuals with learning difficulties and additional needs . Lesley found her calling at Options Group in 2001, this is not just a career she has carved but she selflessly works for the lives of others for whom she is a staunch activist .

Lesley shares her knowledge and skills and has provided training to the local community, she organises training days for public services, police authorities and community workers . Lesley is a member of the CQC society and she mentors others . Lesley continues to make differences to children and adults with autism and she is a passionate advocate to ensure that everyone is living their best life . 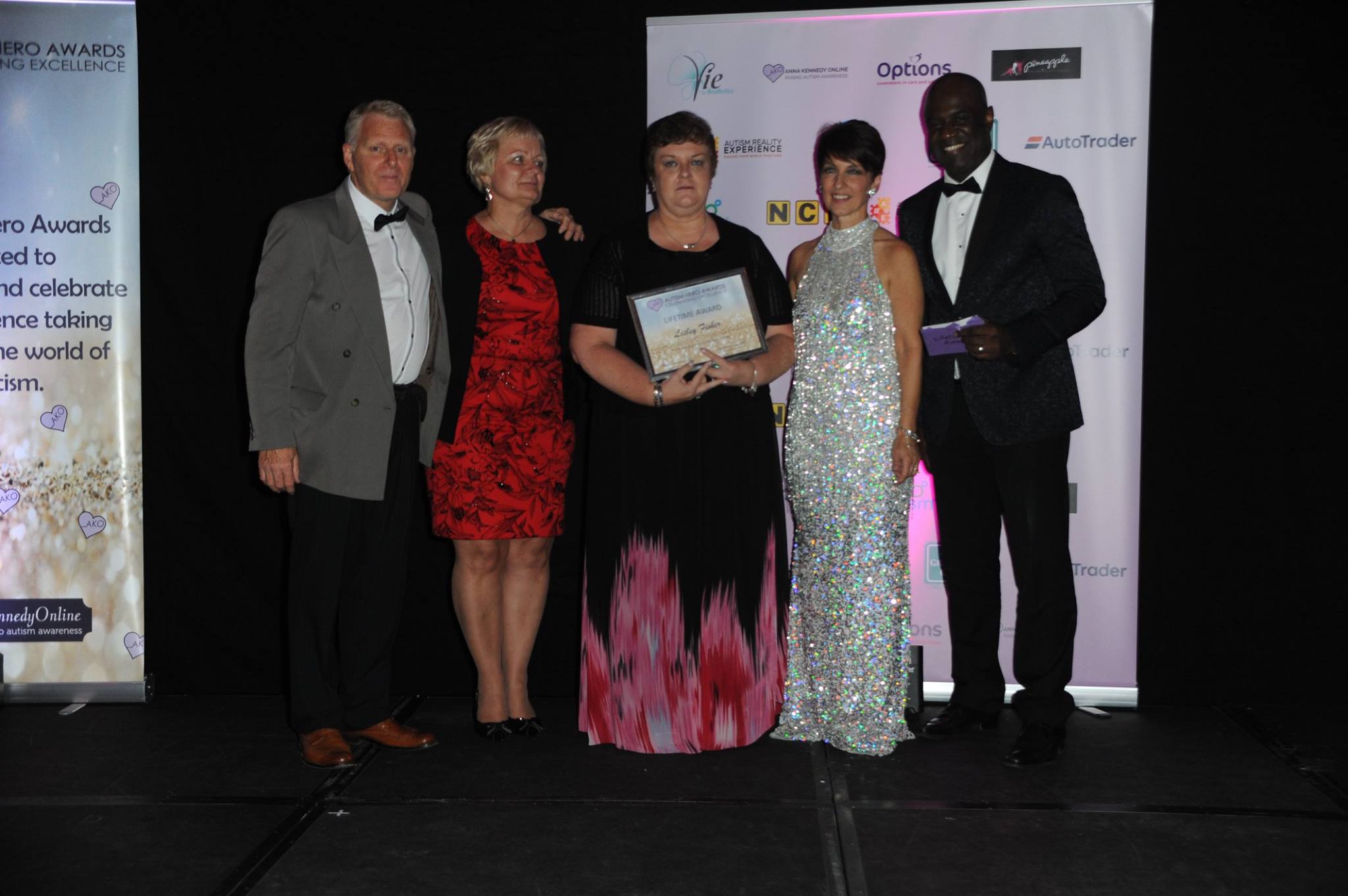 Libby has been nominated for this award by Alison Fisher . Libby is a consultant speech and language therapist who focuses on troubleshooting complex cases . As well as this she offers an online community hub, under takes webinars and frequently visits autism advocates to undertake live TV and radio appearances to raise the importance of speech, language and communication difficulties in particular individuals with ASD .

Libby also runs courses out in the community to bring both professional and parents together to understand the difficulties . Libby has recently become a firm advocate for raising awareness of the PDA profile and launched the PDA societies call for action . Libby makes a huge difference to a lot of people’s lives . 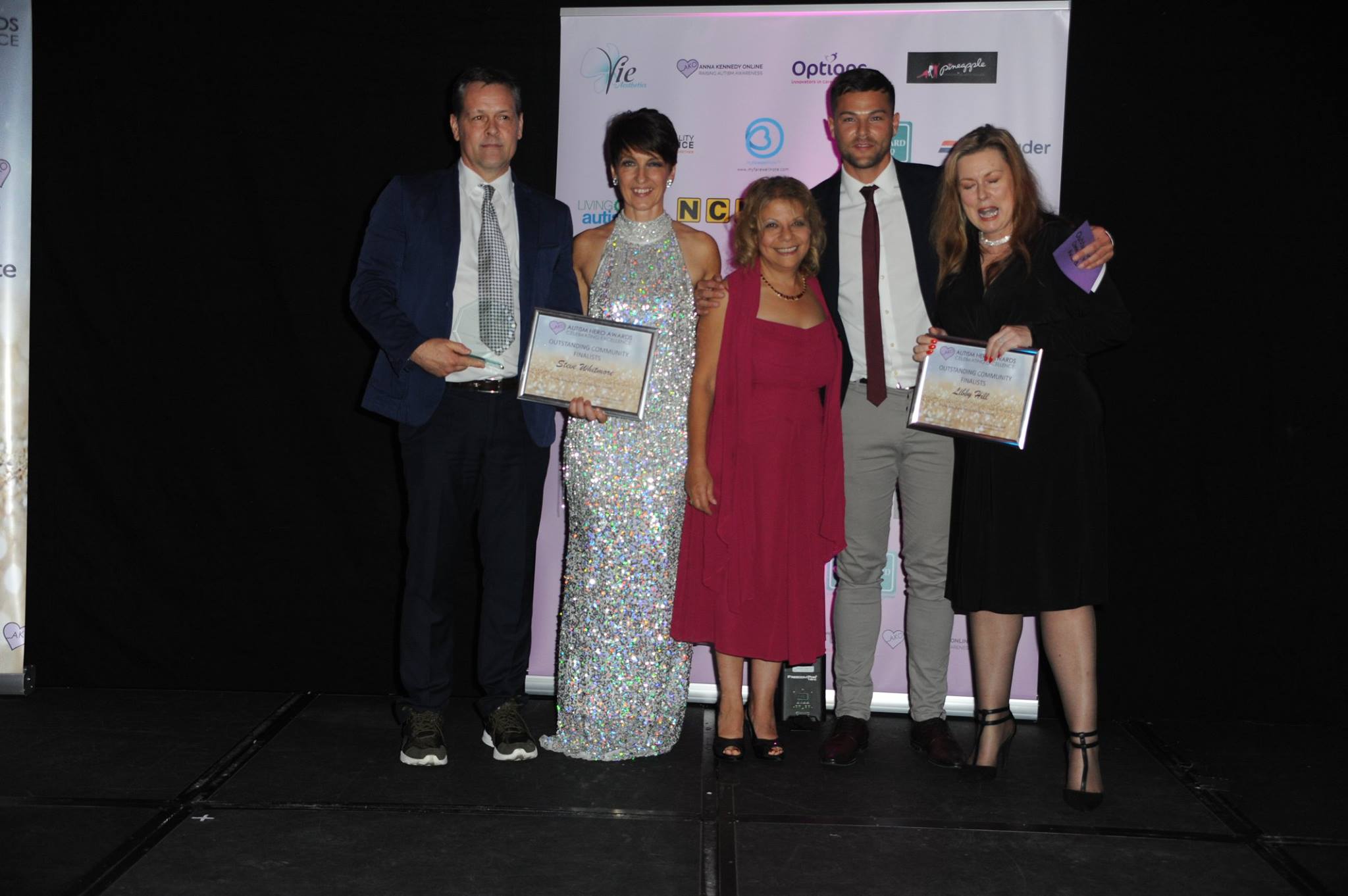 Steve nominated ‘Books in the Nik’ for this award, Steve is a police volunteer initiative providing books for all detainees in Metropolitan Police custody. Focusing on children and young people with learning difficulties who find reading a book in custody helps to calm them down and relieves a stressful situation.

Over 200,000 individuals are processed through custody annually and it is estimated that 20/30% have learning difficulties or disabilities . For an autistic person the stress can be considerable, bright lights, the noise and strong smells. The act of giving a book between police staff and detainees has been shown to create rapport and builds trust. Anxiety levels decrease and detainees are seen to relax and calm down.

Vicki has been nominated as she works tirelessly and has volunteered over the past 15 years working with children and young adults with autism in the creative arts and she supports them to gain a recognised qualification. Vicki goes above and beyond to help and provide people in Birmingham and beyond, despite having multiple disabilities herself which makes everyday life challenging.

Vicki has recently gained paid and voluntary roles in acting jobs in Birmingham and toured one of the shows nationally, proving that even adult actors can wear ear defenders, work professionally and not be held back despite their disabilities. 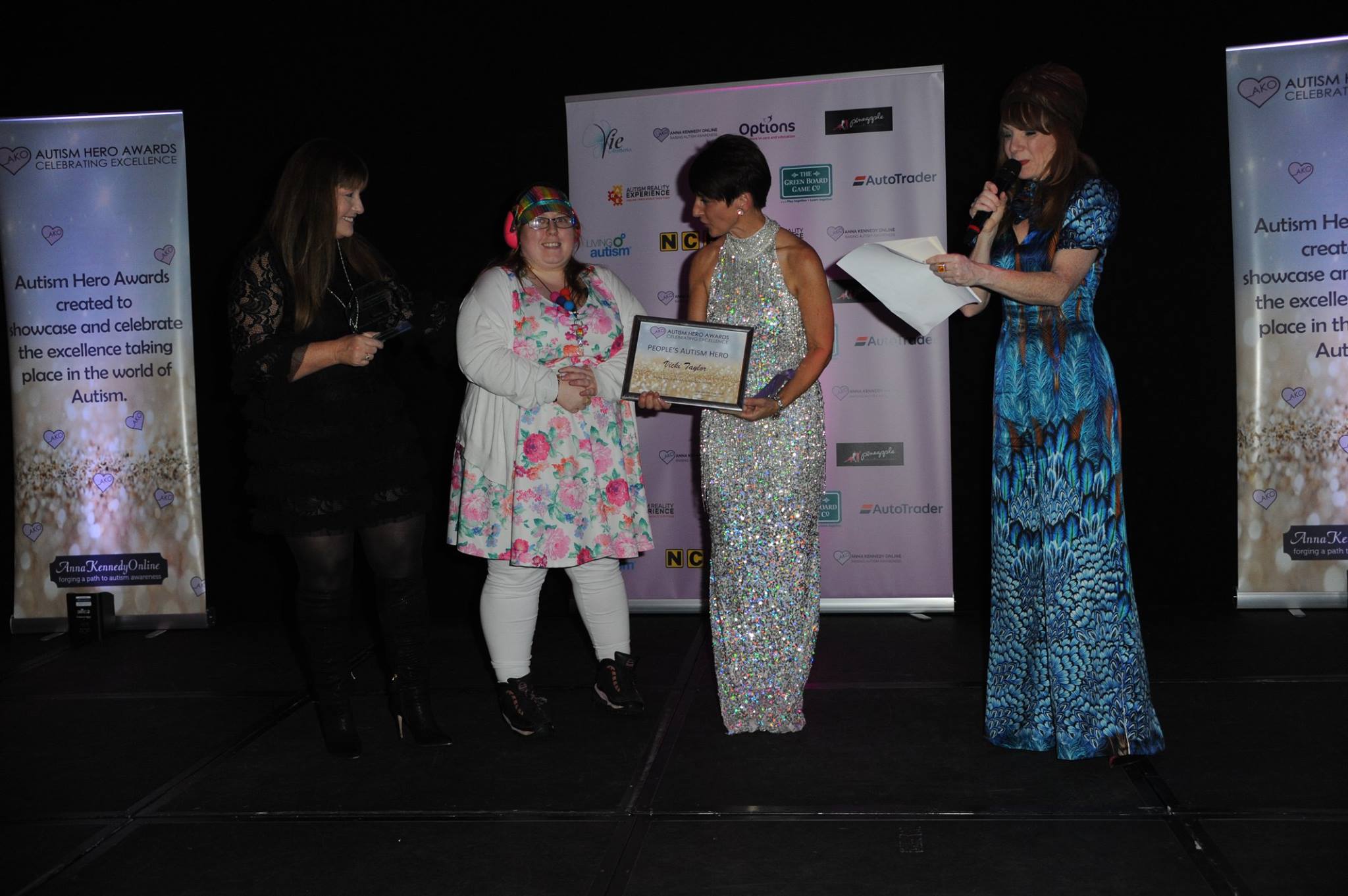 Rebecca has been nominated by Joan Whittle, Emma Taylor and Thomas Lopeman for this award, for her all round enthusiasm and passion to helping parents, carers and young people living in her area. She is the founder of the junior autism group which she created to support individuals to have a safe contained area where children can play, parents can engage with each other and receive information services.

Rebecca has a son with autism called Joshua and everything she has achieved is because of him, she is frequently invited to clubs and groups to speak about Joshua and their journey. Rebecca was recently invited to speak in Poland at an international conference. It’s quite clear Rebecca has a lot of people that are so thankful to her from her numerous nominations . 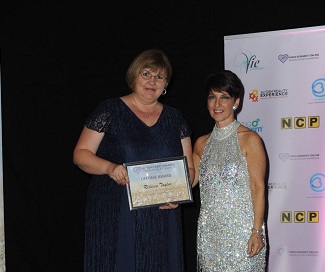 Mickey has been nominated by Steve Foster for this award. Mickey went through school without a diagnosis and left with no qualifications to his name . Eventually finding some help and receiving a diagnosis he embarked on an ama zi ng journey. From getting one GCSE to his first undergraduate degree then followed by three postgraduate Masters degrees resulting in this year him becoming Dr Michael Mayhew .

During this time Mickey’s love and skill with words manifested itself in several novels which were independently published. He received a publishing deal for his first solo non – fiction work The Little Book of Mary Queen of Scots. To achieve everything he has, when he was told at school he was worthless and would not amount to anything, he is Steve’s hero. 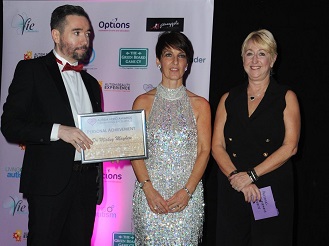 Toby has been nominated by Emma Venning for this award . Toby is the founder of Street Factory in Plymouth, he is a nationally respected hip – hop artist and youth worker and has just been awarded an MBE for his outstanding work in his community .

Toby has transformed the lives of many creating a safe place for them all to feel inspired, reduce isolation and be united in their community. Toby is full of compassion and has a unique gift which comes from within and he genuinely goes above and beyond for the children he works with. He is more than just a teacher, he is an educator who has provided many opportunities for children and adults to reach their full potentials respected hip – hop artist and youth worker. 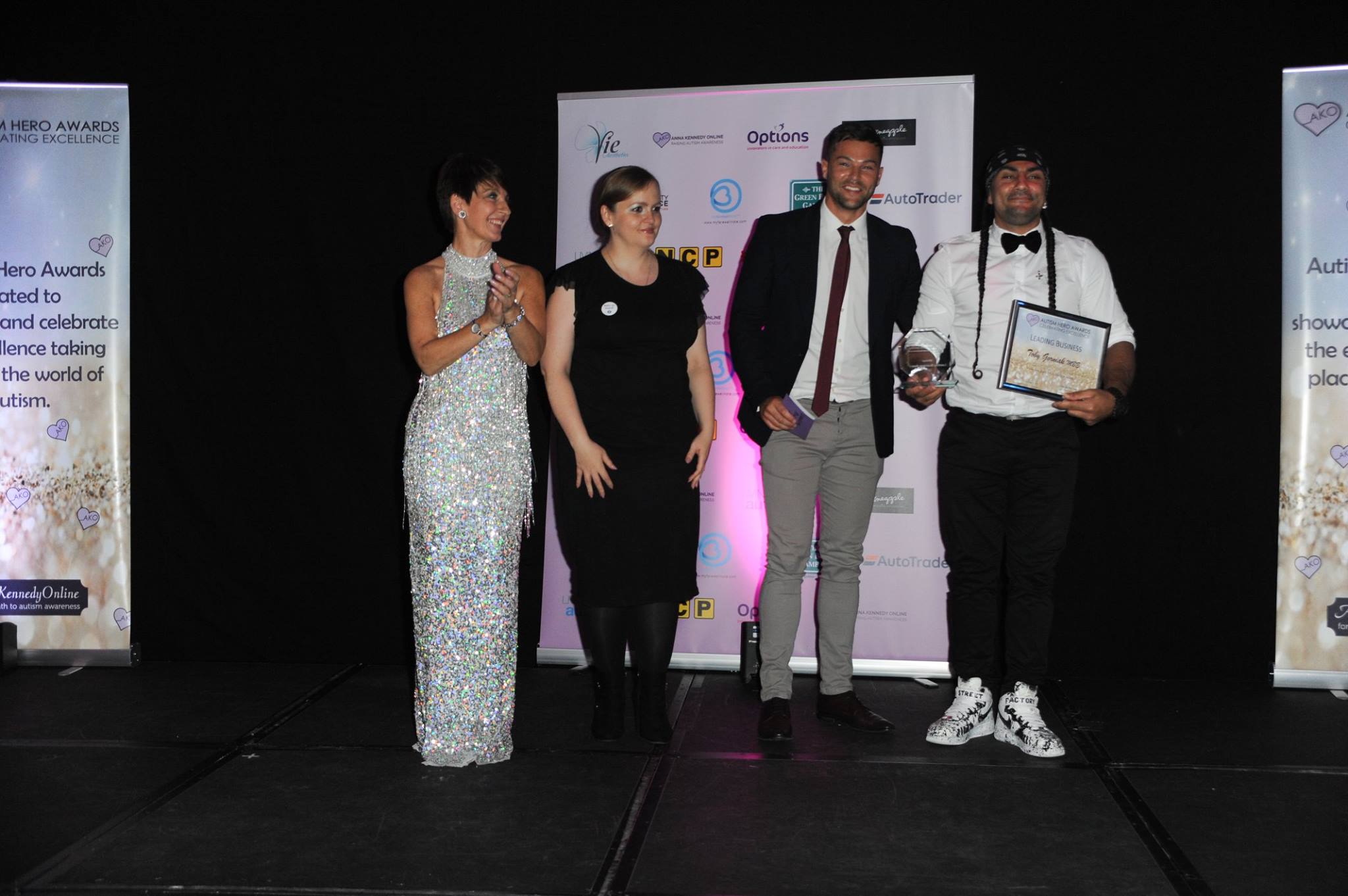 Chris has been nominated for this award by Julie Clarke. Chris runs an extremely popular Facebook Page called Autistic Not Weird and he has created a wonderful community through all his work . Chris has over 80k followers on Facebook alone and also runs two private support groups online. He creates a safe, friendly and inclusive place for everyone to find support and make friends.

Chris produces articles covering autism – related topics including SATs and exams advice, mental health issues and about growing up autistic. Chris has published a book called ‘What we love most about life’ which features 150 autistic children answering the title question . The book has been valuable to many children and adults making them feel less alone. 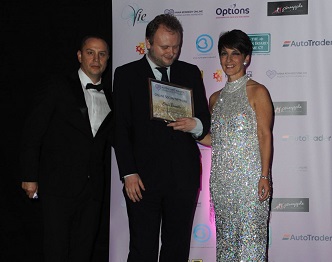 Adrijana Owen is an amazing and strong lady, married to Mervyn, they have two beautiful sons Luka and Ben. Adrijana with her friend Karen has opened three preschools local to her and spends most of her spare time to help families who are going through difficult times with diagnosis at an early age. Adrijana not only continues with this amount of tireless work, time and effort that she puts in and helps so many vulnerable families and offers so much of her personal time in between running three businesses.

Adrijana in between all of this, continually volunteers for AKO for the events, this woman made of steel, the number of personal challenges that she has taken for our charity is overwhelming in May 2015, Adrijana climbed to the top of Ben Nevis and waved the flag for Anna Kennedy online, she took her challenges to a whole new level when she put herself forward to a 100 km Race to Stones for Anna Kennedy Online, this lady is the most extraordinary volunteer. 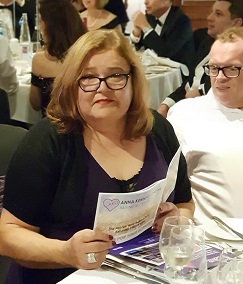 Oliver was nominated by Stephen P . Beaudoin PhD for this award. Oliver has been very successful as a faculty entrepreneur in translating research from his autism lab in to commercially viable products that have made an outstanding impact for the autism community. Oliver has designed iPad applications called SPEAKall and SPEAKmore which help  oung adults and children to communicate and also understand concepts of language.

Ever since Oliver’s start – up company SPEAK MODalities has bought the technology to the market and has been adopted by over 40,000 families, 30 universities and autism clinics all over the world . The technology fills a gap particularly for the minimally verbal individuals with autism who are not well researched and undeserved. It is making a huge difference to many people’s lives. 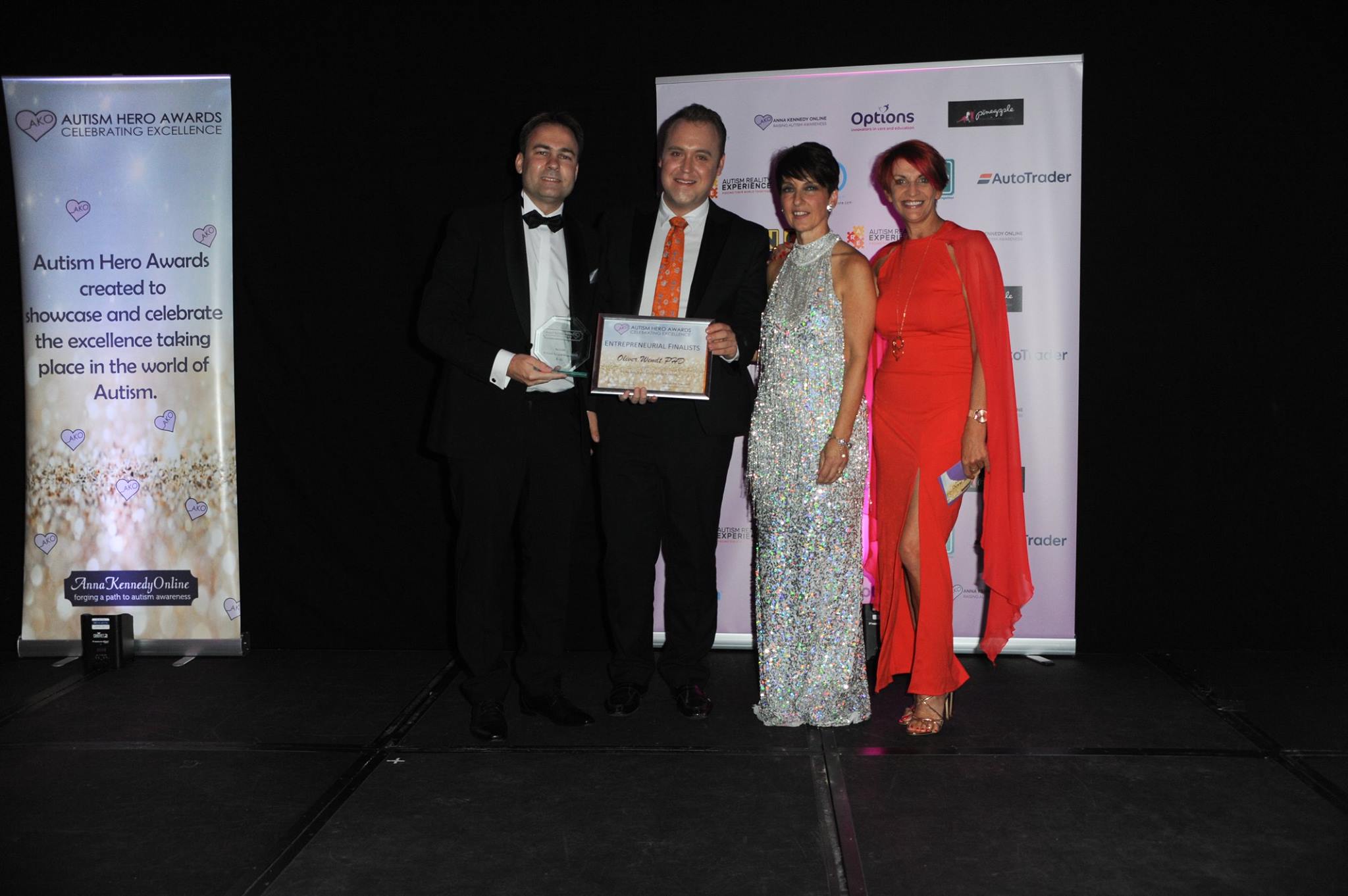 Paula has been given the Special Recognition Award by Anna Kennedy OBE . Paula McGowan is the mother of her son who died in Southmead Hospital after he was given medication against her wishes she has launched a petition calling on the Government to introduce new training.

Thomas Oliver McGowan, known as Oliver, ‘lit up every room’, according to his mum Paula . She said despite suffering from a range of illnesses after suffering from meningitis as a baby, he was still the most motivated, positive and determined person she had ever met . Now she hopes to create a lasting legacy for her son, by helping other disabled children receive the appropriate care in hospital.

Paula is campaigning to the Government to ensure all healthcare professionals get mandatory training to address the huge health inequalities facing autistic individuals and a learning disability . She has received thousands of signatures from across the country in support of mandatory training and has spoken to Government Officials asking for their support . 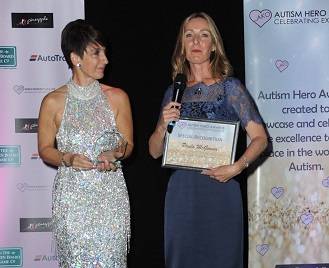